Uber and developer Related Cos. released renderings of a skyport that could be built at Related’s mixed-use development underway in Santa Clara, Calif. Illustration: Foster + Partners 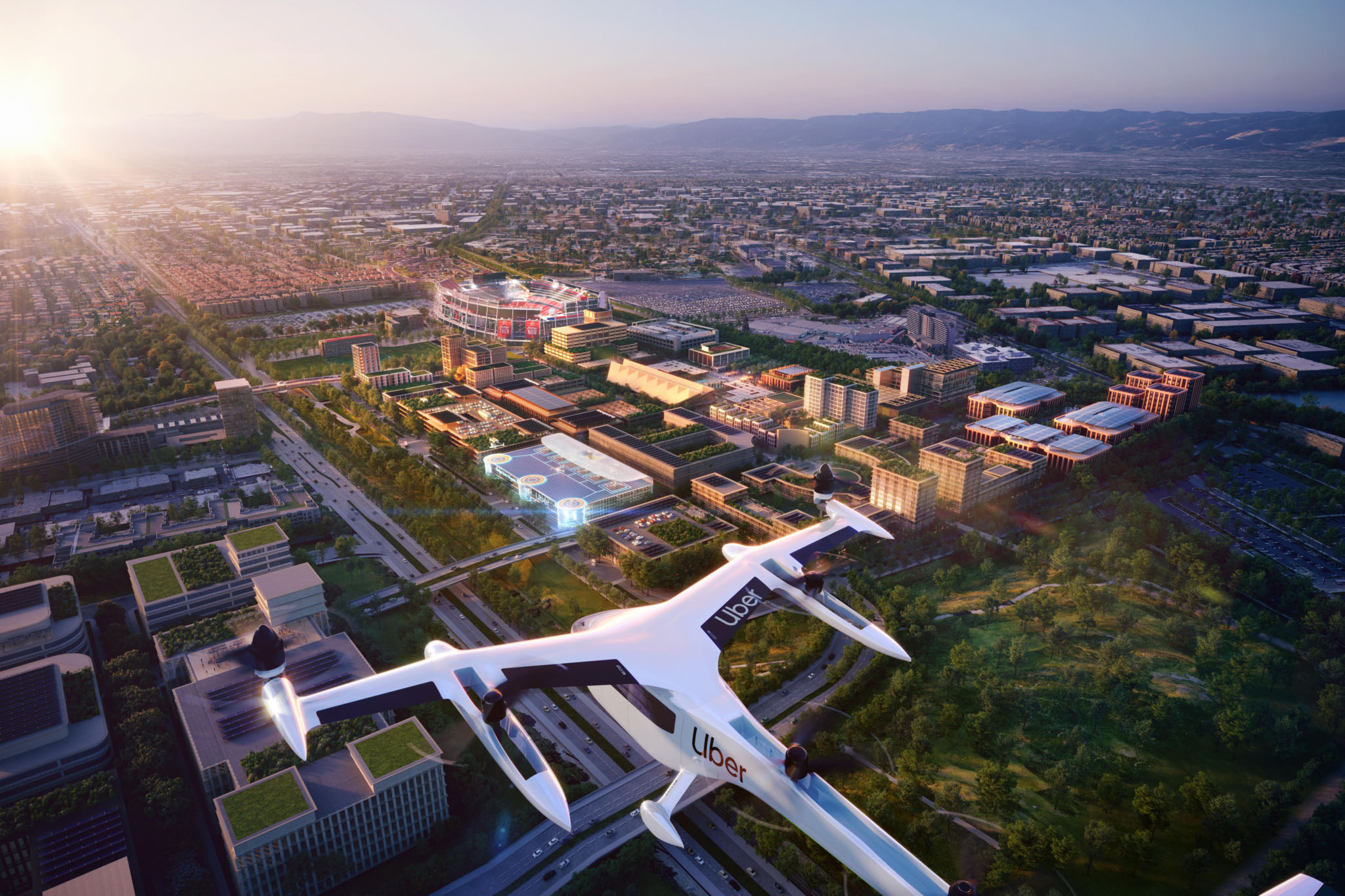 Futuristic flying cars edged a step closer to present-day reality: Ride-hailing tech giant Uber struck a deal with prominent developer Related Cos. as a partner to design and develop future skyports in the United States for its planned Uber Air service.
The companies released the first joint renderings for a proposed skyport that could eventually be built as part of Related’s 240-acre mixed-use community planned in the Silicon Valley city of Santa Clara, California. It would serve as a transit hub for Uber vehicles that resemble flying cars from the 1960s cartoon “The Jetsons” but are actually aircraft with vertical takeoff and landing capabilities.
Related Cos., based in New York, is currently working with Santa Clara city officials on a sprawling development, once known as City Place, that is expected to remake a golf course and landfill into 5.4 million square feet of office space, 1,280 new apartments, 400 “extended-stay” apartments, 1 million square feet of retail and a 440-room hotel near connections to Caltrain and Bay Area Rapid Transit.
“Our shared commitment to innovation and passion for cities and enhancing urban life makes this an ideal partnership,” said Related Cos. Chief Executive Jeff Blau, in a joint statement. “Related has been exploring, investing in, and implementing new forms of urban mobility from bike-share to self-driving vehicles – and urban aviation is the next frontier.”
As cities become more congested with traffic, entrepreneurs and companies have been exploring alternative methods of travel to the car, which could become a kind of amenity that could attract more attention to commercial properties. Billionaire Elon Musk is exploring underground tunnels while firms such as Uber are experimenting with flying cars and helicopters. The ideas are also a sign of how the rapidly evolving high-tech industry is pushing more commercial real estate executives and developers to plan into the future to compete for tenants and make their projects more lucrative.
Santa Clara renderings from design firm Foster + Partners envision a skyport to be placed along a major traffic artery, with a flight deck designed to charge up to five aircraft simultaneously, similar to the way in which electric cars are powered. There are also dedicated landing and take-off areas.
No timetable for aerial service at that location has been established, and Uber is exploring other potential locations with the Related Cos., among the nation’s largest developers of residential and mixed-use communities including New York’s Hudson Yards.
But the service is not expected to be limited to Santa Clara or Related. Eric Allison, who heads Uber Elevate, said in a statement the skyports are part of plans for aerial ride-hailing that the company said “can help improve urban mobility in cities around the world.”
In fact, Uber spokesman Matt Wing told CoStar News the first demonstration flights for Uber Air are already planned for 2020 in the Dallas-Fort Worth market. Uber last year entered into an agreement with developer Hillwood Properties to plan a skyport in the Dallas suburb of Frisco, Texas.
After Dallas, the tech firm’s Uber Elevate division plans to test services in the Los Angeles market, then Melbourne, Australia, though Uber has not announced developers in those cities.